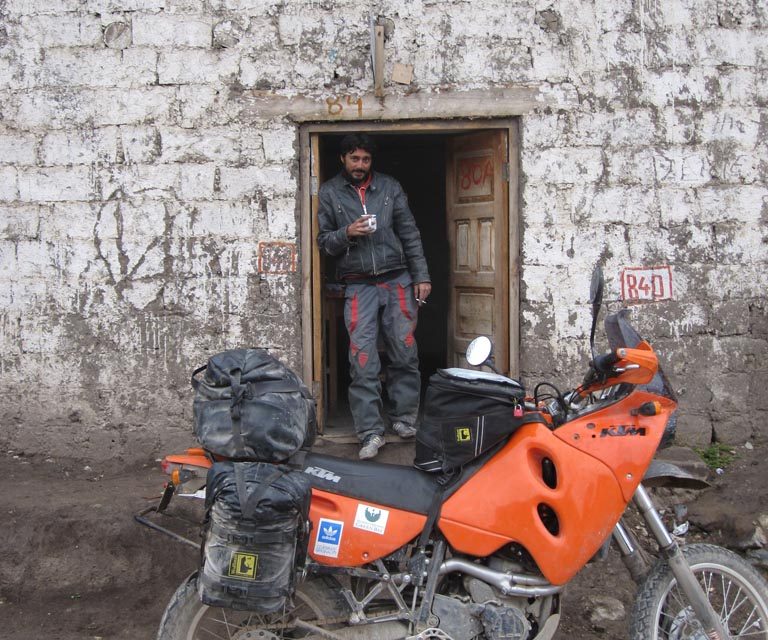 Straight and Left, a ride through South America on a bike

Anybody who has achieved what he set out to, can understand what I felt when I finally got my bike, a beautiful KTM 640 Adventure, from the Bonded warehouse in Bogota Colombia. The simple plan was to ride south: Colombia, Ecuador, Peru, Bolivia, Argentina, Chile, Brazil and everything else I could experience in South America. 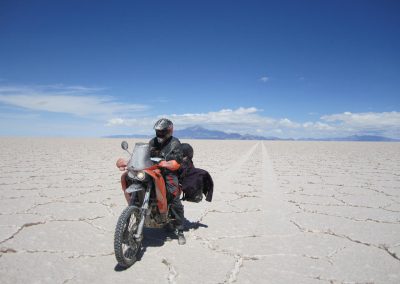 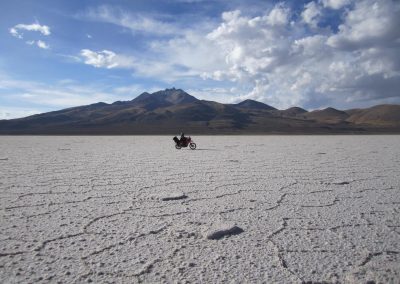 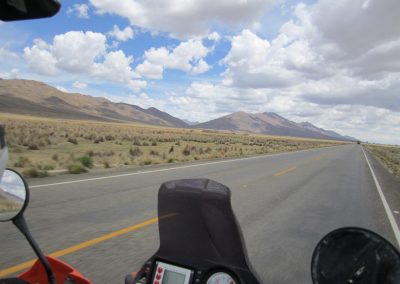 Day two, as I was crossing the Andes, I took the worst fall of my trip. Just day 2, bike on top of me for 30 minutes, blood oozing through my pants, and confidence oozing out of me. Not the best start. The next day I made a deal with my bike, I promised I would take her home with me, as long as she got me to the airport – she did. The police warned me against going deep into the Colombian forests. I didn’t listen. Two days through dirt tracks, and I finally saw them. The FARC (Revolutionary Army of Colombia – bad people! ) they had their AK 47s and did not look happy. I prayed and rode away as fast as I could. The rest of Colombia was amazing: a lonely desert, dancing cities and beautiful churches built along solid rock canyons.

Next up, Ecuador. I had a college buddy in Quito, and spent a week with him. His mother was like mine, she fed me till I dropped, and his dad got enough booze in me to manage the high 2,500-meter altitude. I rode along the Pacific Ocean, on a lonely, twisty road called ‘Routa Del Sol’. It literally means ‘The Route of the Sun’ but for me, I thought of it as the route of my soul. Think about it, the blue Pacific Ocean with its wind in your face, scented with the freshness of salt and adventure, and you on a motorcycle, no idea where you’re going to stop for the night, but probably some place exciting. This is how I felt for almost four months.

Peru was nothing short of Pure Magic. I ended up spending a month there, riding through 5,000-meter and snow-capped peaks, and even spending five days on a boat through the Amazon jungle, with nothing but a hammock to lie on

For 10 years I have sat through lectures, tutorials, interviews, meetings, seminars, conferences and much more, all the time wondering in the back of my mind what it would feel like to do this trip and reach the end of the world.

“In the city of Tango, it’s just spectacular, am going to daNce with her, drink with her, and eat with her. Buenos Aires, I got to you after 11,500 kms on my motorcycle, but we arrived just as I wanted to: free, open and the wind in our faces.”

Next up Lama, small villages where they had never seen a tourist and two days of no human contact at all. I kept telling myself, this was not a holiday for me to check out the sights, but an adventure for the sights to check me out, and to see if I was worthy to cross. At the Amazon I decided to take the most local barge down the Amazon for five days. All I had was a hammock, and chickens on the boat to eat.

Cuzco, then Machu Picchu. This is a must-see for all, there is magic there, and you have to sit and feel it to understand it. I found a rock, sat down for three hours, admiring this beautiful place. I have been a fan of Che Guevara for about 10 years now, and I had to see where he was killed in Bolivia. When i reached there, in Sant Cruze Bolivia, all my possessions were stolen, including my passport. These things happen, you just have to keep moving. With a great network of family and friends, I was back on my feet in three weeks. Seeing the place where Che was killed somehow completed a journey in me.

My fiancé Pritha met me in Bolivia and we hit the Salt Flats of Bolivia. The ride there was the toughest on the trip. We woke the next morning and saw a white expanse in front of us. No roads, no signs, nothing, just salt as far as the eye could see. We spent two days on the salt flats, camping under some rocks. It took us five hours to get to Argentina. Once in, we headed for the Dakar rally. Seeing those bikes and cars flying through the desert gave me confidence, and inspiration to take part some day.

Pritha left for India, and I moved on. I was sad and tired at this point, and did not feel like battling the winds of Patagonia, which has a lot of wind, penguins, elephant seals and sea lions. I had ridden 15,000 km, consumed 650 liters of petrol and been through six countries. I got to the end, saw a bench, sat down and lit a cigar a friend had given me. All I could think about was about when I would go around the world on my motorcycle. I planted the Indian flag at the end of the road and took a picture.

Riding with the Veteran-Navroze Contractor